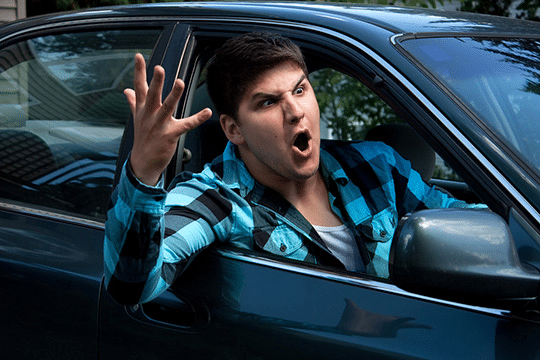 The place in Britain with the rudest drivers has been named and shamed in a new study and motorists in Bristol are the biggest menace on our roads latest research shows.

Using a mobile phone at the wheel and not indicating the worst habits seen in drivers.

The study of UK drivers by Privilege car insurance found that when driving offences were analysed, Bristol’s motorists were named as the worst offenders in a quarter of all categories.

A whopping 70% interviewed saw other drivers using a mobile phone without a hands-free kit, 65% reported other drivers not indicating or driving too fast, and more than half saw drivers constantly change lanes to get ahead.

But drivers in the south west England city are closely tailgated in the study by Liverpudlians and drivers in Norwich.

Other offences noted included pulling out in front of other drivers, taking up too much space on the road, blaring their horn unnecessarily, and not observing right of way.

When it comes to Brits admitting their own bad driving habits, as opposed to those they witnessed in others, Bristol came out top again, with 61% of Bristolians owning up to road rudeness, compared with Londoners and Liverpudlians, where only 56%claimed to have bad road manners.

Across the UK, the offences that drivers say they commit themselves include driving too fast (20%), nudging into traffic when pulling out of a junction or changing lanes (10%) and even driving through puddles to splash pedestrians (three%) – a habit that in London, a staggering one in six (16%) of drivers admitted to.

The study by Privilege car insurance also found, that although Brits are known worldwide for their politeness and love of queuing, the trait appears not to translate to time behind the wheel.

When scrutinising driving rudeness or bad habits by gender, women over 55 were judged to be the rudest in several areas, including nudging into traffic or changing lanes, driving too slowly and driving in the wrong lane.

Men on the other hand, are the worst for cutting corners more than women, undertaking, driving down the middle of the road and taking up too much road space.

Charlotte Fielding, Head of Privilege Car Insurance, said: “Inconsiderate or careless driving are two of the main causes of accidents on our roads.

“Hopefully the findings of this report will help remind people that their actions on the road do have an impact on other drivers – it’s better to get there safely than risk injuring yourself or someone else, so take a deep breath, leave a safe distance between your vehicle and the car in front, and drive at a safe speed.”