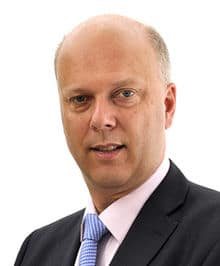 EU legal changes could mean that speeding motorists escape speeding fines according to a cabinet minister.

Justice Secretary Chris Grayling (pictured) spoke out over the draft European directive on the rights of suspects and the presumption of innocence.

The directive stresses that any compulsion placed on a suspect should not destroy their right to remain silent, and their right not to incriminate themselves.

It means that in the case of a motorist being caught on a speed camera, the owner would no longer be forced to co-operate by saying who had been driving, with the whole system then being “thrown into chaos,” according to Mr Grayling MP for Epsom and Ewell.

Currently the emphasis is on the owner of any vehicle caught speeding by a fixed camera to declare who was driving at the time, or face a fine and penalty points themselves. Under the new directive a motorist would be able to say nothing without facing prosecution.

On the burden of proof lying with the prosecution – Ministers believe this may undermine some cases, for example where an alleged murderer uses a defence of insanity and the burden of proving this currently lies with him.

On the prevention of statements by authorities that refer to the suspect as guilty before conviction – Ministers believe MPs may fall foul by making claims in Parliament “in the public interest”.

Mr Grayling has decided Britain will not “opt in” to these measures. But the European Commission rejected his claims. A spokesman said: “None of this will apply to the UK. It will provide safeguards ensuring a fair trial for British citizens accused abroad.”

He said eleven EU states including France, Greece, and Spain had been declared in violation of the presumption of innocence by the European Court of Human Rights between 2007 and 2012.