Three young people killed or injured on our roads EVERY DAY

Three young people killed or injured on our roads EVERY DAY 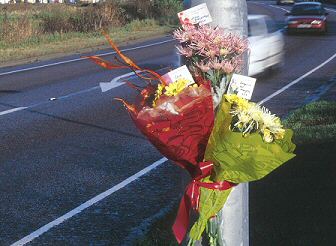 The Institute of Advanced Motorists (IAM) has claimed the number of young people killed or injured in road accidents in the UK every year is “unacceptable”, following the publication of its road safety manifesto.

IAM chairman Alistair Cheyne said: ‘In the last five years, more than five-and-a-half-thousand young people have been killed on our roads or had life-changing injuries.’

Mr Cheyne also explained how he felt that almost every one of these accidents was avoidable. But he also pointed out the responsibility for parents and communities to educate young drivers, claiming: “All of society has a duty to safeguard our young people.”

The IAM plan to put pressure on politicians ahead of next year’s general election, demanding that road safety be made part of the national curriculum, and that driving on high speed rural roads be part of driving tests for all learners.

This website uses cookies to improve your experience while you navigate through the website. Out of these, the cookies that are categorized as necessary are stored on your browser as they are essential for the working of basic functionalities of the website. We also use third-party cookies that help us analyze and understand how you use this website. These cookies will be stored in your browser only with your consent. You also have the option to opt-out of these cookies. But opting out of some of these cookies may affect your browsing experience.
Necessary Always Enabled

Performance cookies are used to understand and analyze the key performance indexes of the website which helps in delivering a better user experience for the visitors.

Analytical cookies are used to understand how visitors interact with the website. These cookies help provide information on metrics the number of visitors, bounce rate, traffic source, etc.

Advertisement cookies are used to provide visitors with relevant ads and marketing campaigns. These cookies track visitors across websites and collect information to provide customized ads.

Other uncategorized cookies are those that are being analyzed and have not been classified into a category as yet.