What Happens If I Plead Guilty At Magistrates Court UK

Home What Happens If I Plead Guilty At Magistrates Court UK

What Happens If I Plead Guilty At Magistrates Court UK

If you have been summoned or charged to appear before a court for a motoring offence, you may be wondering what happens if you plead guilty at Magistrates Court UK. If you plead guilty in a Magistrates Court, your case will not go to trial and you will be sentenced immediately, unless the charges against you are particularly serious, in which case it will be referred to the Crown Court. When pleading guilty at the outset, the sentence handed to you can be reduced by up to one-third of the maximum sentence available to the Magistrate.

What Happens At A Magistrates Court?

Virtually all criminal court cases start and be completed in a Magistrate Court. In a Magistrates Court, a panel of two to three Magistrates or a District Judge will review minor criminal cases such as petty theft, criminal damage, public disorder and motoring offences.

Cases heard by a Magistrate are broken down into three categories:

Caddick Davies is a team of motor offence solicitors who can provide representation, defence and advice when you are charged with any kind of traffic offence. If you are summoned or charged to appear before a court, you will need the skills and expertise of an experienced solicitor.

A solicitor specialising in the area of law that you are charged with committing an offence under will provide a strong defence counsel that can be relied on in Court to give you the best chance of a positive outcome. Our team at Caddick Davies have successfully defended many motorists in Courts around the UK and can offer a no-obligation consultation to discuss your case.

Read on to understand more about pleading guilty at a Magistrate Court in the UK.

Pleading Guilty At A Magistrate Court 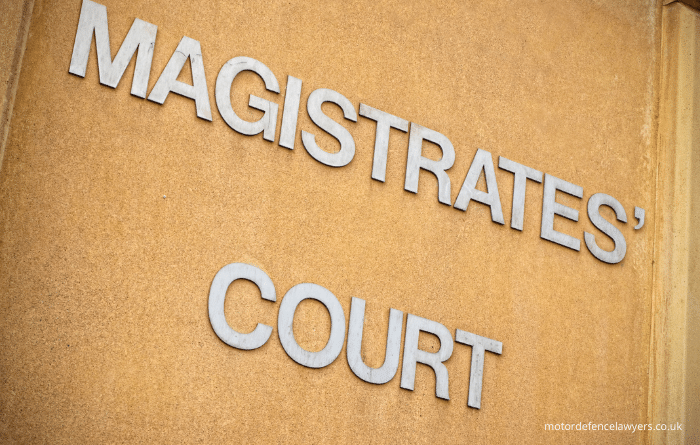 If you have committed a minor traffic offence that can’t be resolved by accepting a fixed penalty notice, you will need to enter a plea at a Magistrate Court. You can enter a plea of guilty or not guilty.

Traffic offences are generally ‘summary-only’ offences meaning they can be heard and sentenced in a Magistrate Court. In court, the clerk will read out the charge or charges against you and you will be asked if you plead guilty or not guilty. The decision on which plea to enter should be made as a result of the discussions held and advice given by your solicitor before the Court date.

If pleading guilty, you are accepting that you have committed the criminal offence that you are charged with. When you have entered your guilty plea, it is then up to the Magistrate to convict you of the offence and issue appropriate sentencing, unless they choose to refer it to the Crown Court which would only be done in the most serious cases.

In the case of most motoring offences, you will be sentenced immediately to the Magistrates Court.

Will Pleading Guilty Reduce My Sentence?

Sentencing guidelines provide a range of appropriate sentences that the Magistrate can issue depending on the seriousness and specifics of each offence presented to them. There are sentencing guidelines available for all crimes, including speeding, dangerous driving, failure to stop at the scene of an accident, and all other driving offences.

These guidelines provide a framework of factors that the court should take into account when issuing sentencing to offenders. By using the framework to provide a fair and consistent approach to sentencing, sentences are proportionally appropriate to the individual and crime in question regardless of who the Magistrate is on the day.

One of the factors that a Magistrate will consider is the original plea that is entered by the defendant. If you plead guilty, you will be awarded a reduction in your sentence, up to a maximum of one-third of the total sentence that could be issued. To qualify for this reduction you must plead guilty from the start of proceedings and not change your plea halfway through the Court hearing. The Sentencing Council’s guideline, Reduction in Sentence for a Guilty Plea, sets out how the level of reduction is determined.

If you have been summoned or charged to appear before a court you may be wondering ‘what happens if I plead guilty at a Magistrates Court UK’. We hope this article has given you an overview of the Magistrate Court process that will be followed and how your sentence can be impacted by entering a guilty plea from the outset.

Our leading team of motoring offence solicitors at Caddick Davies have a reputation for success when it comes to defending motorists charged with driving offences. We work with clients all over the UK and are rated in the top 20 law firms on TrustPilot- get in touch today!