Plans to reduce motorway speeds skid to a halt

Home Plans to reduce motorway speeds skid to a halt

Plans to reduce motorway speeds skid to a halt 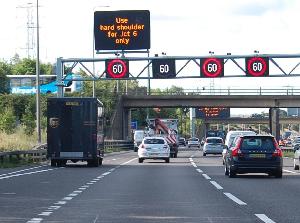 Plans to impose a 60mph speed limit on parts of the M3 and M1 motorways to cut air pollution will not be going ahead – for the time being anyway according to the BBC.

Transport Secretary Patrick McLoughlin has given the Highways Agency 18 months to devise alternative methods to tackle pollution on a 32 mile stretch of the M1 in Derbyshire and South Yorkshire and 2.8 miles of the M3 in Surrey.

If none can be found a 60mph limit could still be imposed at peak times.

However, Mr McLoughlin has ruled out a blanket cut in the speed limit and The Highways Agency has been asked to look at different ways of measuring local air quality.

It is also looking at alternative methods of cutting pollution, such as erecting high barriers along the relevant sections of the motorway to funnel fumes away from ground level.

These barriers have been found useful when it comes to cutting pollution and noise in large-scale tests in Holland, where speed limits have also been reduced on busy trunk roads amid concern about air quality.

Another option might be banning heavily-polluting vehicles at certain times.

The air quality concern is particularly focussed on the M1 and M3 during road-widening schemes which are being introduced to cut congestion.