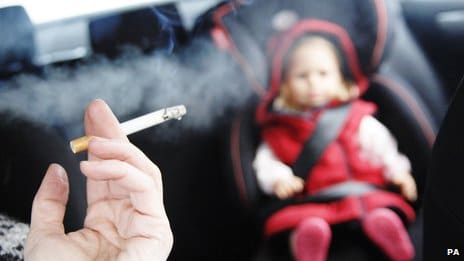 Government plans to prevent people from smoking in cars which are carrying children seem to be gathering momentum after a free vote on the issue in the House of Commons this week.

Should the law be passed drivers could face a hefty fine and receive penalty points on their licence if they are found lighting-up behind the wheel when travelling with juniors.

MPs voted in favour (376 votes to 107) of an amendment to the Children and Families Bill, which empowers, yet does not compel, ministers to bring in a ban in England.

But Downing Street sources have said The UK government will make it a criminal offence to smoke in cars in England when children are passengers.

And it doesn’t look like the bill will be confined just to England with Welsh ministers now having to decide if they want to introduce the law.

A Ban on smoking in cars when children are present is already enforced in some US states as well as in parts of Canada and Australia.

Unlike the ban on drivers using a mobile phone while driving which was introduced in 2003, this is seen as a way of protecting children from the effects of second hand smoke

Other people’s smoke contains more than 4,000 chemicals, some of which are known to cause cancer and exposure has been strongly linked to chest infections, asthma, ear problems and cot death.

It’s thought that 300,000 children in the UK visit a GP each year because of the effects of second-hand smoke, with 9,500 being admitted to hospital.