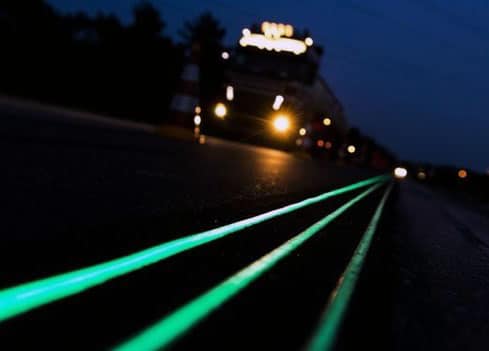 Roads in Holland can now be illuminated in the dark thanks to specially designed road markings.

The system uses a paint which contains a “photo-luminising” powder that charges up in the daytime and slowly releases a green glow at night – which could spell the end for streetlights.

Interactive artist Daan Roosegaarde teamed up with Dutch civil engineering firm Heijmans to work on the idea, with the technology being tested with an official launch due later this month on the N329 in Oss, approximately 100km south east of Amsterdam..

The markings can glow for up to eight hours in the dark once fully charged.

Speaking to the BBC last year about his plans Mr Roosegaarde said: “The government is shutting down streetlights at night to save money, energy is becoming much more important than we could have imagined 50 years ago. This road is about safety and envisaging a more self-sustainable and more interactive world.”