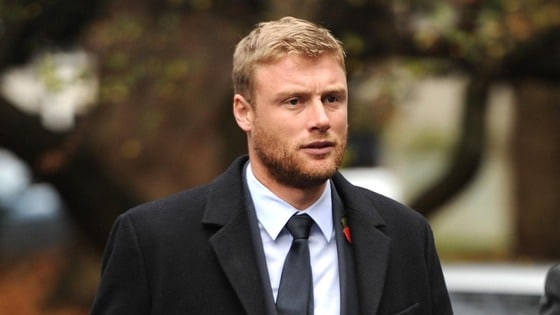 Already on nine points for speeding and in danger of an automatic ban after admitting speeding in his Bentley on the M6 in January Flintoff, he was caught doing 87mph near Linstock in Cumbria, magistrates were told – the fourth time he has received a speeding ticket in three years.

However, they accepted a ban would have an adverse effect on the extensive charity work he carries out throughout the year.

Instead of a ban, the cricketer was given the three points on his licence and fined £330 but allowed to keep driving.

His solicitor Michael Neofytou told the court a ban would also affect his TV work and intrude on the privacy of his three children. But Flintoff, of Mottram St Andrew, Cheshire, was warned he would not be able to use the same reasons again in court if he was caught speeding again in the next three years.

This latest speeding ticket has taken him to 12 points, which would normally mean an automatic ban after the “totting up” process.

But Mr Neofytou mentioned his client’s “illustrious” cricket career for Lancashire and England and his being made an MBE in 2005 but did not “want to dwell” on those matters, he said.

He said Flintoff was “constantly raising money, or trying to, when not in his professional role”.

His client drove himself to charity speaking arrangements, cricket matches and auctions of cricket memorabilia and “never took a fee”, he said.

Flintoff and his wife “juggle” running their charitable foundation, while looking after their three children, two boys and a girl, aged nine, eight and six, the court heard.

He had helped to raise £800,000 for Alder Hey Children’s Hospital in Liverpool and was attempting to raise another £40,000 to bring it up to £1 million, the amount raised for Great Ormond Street Hospital in London.

‘He’s constantly raising money, or trying to when not in his professional role,’ Mr Neofytou said.

‘He’s very much a Lancashire lad whose status – he’s never got above himself.’

After retiring for 20 minutes to consider the sentence, David Johnson, chair of the bench, said: “Because of your position, the fact that you are well known, clearly the impact has to be on others, more than you yourself.”

He said there would be a ‘potential question mark over the privacy’ of the defendant’s children if he was not able to drive them about and it would affect his ability to attend charity events across the country making personal appearances.

Flintoff retired from cricket following an ongoing knee injury. He played 79 tests for England and was an integral part of Ashes series victories in 2005 and 2009.

Five years after his final test match for England at the Oval, he returned to cricket this year, playing for Lancashire’s 2nd XI. He also played for the 1st XI during the Natwest T20 Blast Finals Day.