Notice of Intended Prosecution: Have you been asked to identify the driver of your speeding car?

Home Notice of Intended Prosecution: Have you been asked to identify the driver of your speeding car?

Notice of Intended Prosecution: Have you been asked to identify the driver of your speeding car? 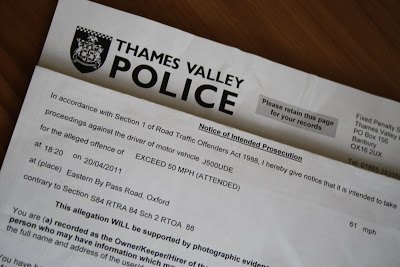 As motorists we are all subject to the laws of the road and from time to time even the most careful of us may make a mistake and commit offence.

The most common of these being speeding.

With the use of new road policing technology, ranging from GATSO Cameras (the yellow camera boxes) to Average Speed Cameras (SPECS) it is very common for our speeding mistakes to be captured by automatic equipment.

This means that the police know that a particular vehicle identified by its registration plate has been committed.

But there’s one thing that even the most advanced pieces of equipment not tell the police –who was driving?

As a result of this the law entitles the police to contact the registered keeper of the vehicle to ask who was driving and to ask any other person if they have information about who the driver was.

The police will do this by sending out a combined Notice of Intended Prosecution and Request for Driver Information.

But if a person does not reply to such a request or doesn’t provide the information requested, then they may be prosecuted for an offence of “Failing to provide driver information” – an offence which attracts 6 penalty points and a fine of up to £1000.

To help you avoid the pitfalls of these police requests here are some top tips courtesy of senior partner of Caddick Davies Solicitors, Neil Davies.

I’VE RECEIVED A LETTER FROM THE POLICE, WHAT DO I DO NOW?

Neil says: Firstly it’s important that you respond to the police notice of intended prosecution as soon as you receive it. Ignoring any approach by the police will only cause more problems and could result in a harsher penalty. Here’s what I advise in four easy steps.

WHAT IF I DON’T KNOW WHO THE DRIVER WAS?

Neil says: The law requires the registered keeper to exercise “reasonable diligence” to identify the driver. If you don’t immediately know the driver this simply means that you should do all that you can to work out who it was. Look at the things like who had access to your car and speak to all of the possible drivers, as well as the location of the offence.

If after doing all of these things you still can’t work out who the driver was, you should write to the police explaining your difficulties, including what you have done to identify the driver and give the details of all of those people who might be the driver. If you do this and the police do try and prosecute you for not naming the driver the law provides you with a defence.

I DON’T EVEN OWN THE CAR THEY’RE ASKING ME ABOUT?

Neil Says: Even if you don’t own the car the police are entitled to ask you questions about it. For instance you might be contacted by the police because someone else has named you as the driver and you are under a duty to give them all information that you have that might identify the driver.

Always respond even if your response is that you cannot help and explain why e.g. “I have no association to this vehicle and no information to assist you.”

I RECEIVED THE REQUEST AFTER 14 DAYS – DO I HAVE TO RESPOND?

Neil Says: Most people are aware that the police cannot prosecute you for an offence of speeding unless they have sent a Notice of Intended Prosecution to the driver within 14 days of the speeding offence.

If the notice has been sent to you outside this 14 day limit, you are still under a duty to identify the driver and respond, albeit that the person identified may not then be charged with the speeding offence.